“That’s just plain mean.” Satan said as his face lit up and a wide grin spread across his face face. We were sitting at the bar of our favorite Manhattan spot when the news scrawled across the bottom of the cable news screen. President Bush was suing to stop states from expanding public insurance programs to cover more uninsured children.

"He needn't keep trying so hard to get my attention and spend the afterlife with me in my domain," Satan said, "he had me at Hello!" We laughed.

"Yeah, tell me something we didn't know!" I said.

"This is pretty despicable though, keeping health care from children in need because he believes this is slowly leading to Universal Government Run Health Care." Satan said.

"Yeah, well, he and his administration aren't going to be accused of either great foresight or great compassion. And as for intellectually and morally considering issues, well, I heard he is also committed to outlawing antibiotics to stop the genocide against microbes!"

"So where do you stand on this issue?" Satan asked.

"I am for the genocide of illness inducing microbes, actually, although I understand the importance of microbes in general and support all non-pathogenic microbes, molds and viruses."

"No." He barked. "On expanding these government run programs for children!"

"Ah, well, I am not a fan of Universal Health Care because I believe it will sap the future of medical innovation and grind health care to a bureaucratic halt where we will end up a nation of chronically ill generic pill poppers. I believe that a carefully constructed realignment of health care is in order, and I have peppered these concepts throughout my many months here. However, I am never against fixing anything and Universal Health Care is better than no health care, which the most recent census just announced another 2 and a 1/2 million uninsured in this country to over 48 million! This needs to be addressed and Universal Health care is one way. If the president fears this, he'd better come up with alternatives because a conservative free market President that hates lawsuits should not be threatening to sue states to stop them from providing necessary health coverage to uninsured children. In the short run, these programs make sense and should be put into place while the kind of system wide restructuring I advocate is explored and enacted." I responded. Satan just looked at me.

"You both think very highly of your opinions," Satan began, "but at least your ideas would help people. and George W. Bush's will help him go down in history, not only for so many terrible crimes against humanity in the middle east, and for his atrocious self serving domestic initiatives, but now, for holding back health care from the children! He will have as a big a place in history as he imagines, but not in the way he believes." Satan smiled.

Gary Hart Redux: Or Another Difference between Democrats and Republicans.

I really hate to go against Oprah, because I respect her, look up to her, and sincerely hope to be on her show someday with a book I wrote that she puts on her recommended list! Nevertheless, I cannot figure out why she believes all you need to be President is to be a good person and have some good ideas. If that were enough then Jimmy Carter would have gone down as one of the best Presidents of the 20th century instead of one of our less effectual ones.
I am of course speaking of her endorsing Obama for President. Fortunately, as bad as Democrats are at running elections, as a party they rarely vote in those with good things to say, but no substance, or at least current proof of substance, for what is surely the single most important job in the free world. They didn't vote in Gary Hart, or Howard Dean, even though it was exciting to think you could just embrace change and move the country forward. It takes much more then good intentions and good ideas in this world. It takes foresight, compromise, political abilities, guts, determination, and yes, experience in these areas. Republicans on the other hand love inexperience because it leaves less of a history to dissect and attack. that is why George W. was their candidate. He was a mediocre 1 and a 1/2 term governor of a middle-ground state. Very little to point to, and little to criticize, and really not much to talk about at all...just to speculate...and then, of course, be attacked for speculating. It works for parties afraid of their candidates, but not for those looking for the best. And in that regard I believe Hillary Clinton, should, and will be the Democrat candidate for President, as well as the first female President of the United States of America.
Posted by LHwrites at 9:08 AM 2 comments:

Note to Bush Administration: Just because Satan does it, doesn't mean you have to! 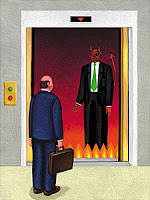 Unfortunately Karl Rove resigned before I ever got to finish this (and unfortunately he did not resign many years before!). I post this as Part 2(a) with the rest coming soon, before it becomes even more irrelevant, along with Mr. Rove and his sidekick Mr. W. Bush!
I am sure we don't need to preface this with a list of all that Rove has to apologize for since we have mentioned it regularly. Of course, he only advises, and the worst offenders are really those that follow his lead. Nevertheless, to remind you we can just look at his most recent debacle; his coordinating on behalf of the administration, the firings of the Federal Prosecutors. Now, this is just the latest in a string of heinous violations of decency and human and religious moral and ethical codes. But it came as quite a shock when I turned on the television and found Rove making this announcement: "I am terribly sorry for helping to engineer a Presidential Administration that makes most Americans long for the good old days of Nixon and Carter and the non lethal crimes of Watergate and runaway inflation and oil prices (oh wait--we have those!). Yes, you see, I have just come to realize that I, as bad as I am and have been known to be since High School, still have not been myself. It appears that I have been channeling the spirit of Lord Voldemort (of Harry potter fame) for the past 6 years." This was not really much of a revelation, of course, but what was, was just how swiftly George W. attacked him on it. Standing next to him, in a show of support, the President appeared quite angry and turned to him and said: "Darn it all, Karl, The Dark Lord? He-who-must-not-be-named!? He was a brilliant tactician, he almost took over the entire Wizarding realm, Karl---why the heck didn't you clue me in so I could have put you in charge of Iraq?!!!!" At this point I started to smell sulfur and brimstone. I just hoped mine wasn't the only television receiving this broadcast! I pulled out my cellphone and, even though I knew it would cause every kind of petty overage known to cellphone science, I called HELL.
"I thought that would get your attention!" Satan said.
"Oh man, you mean it wasn't real?" I asked.
"Oh, it's real, except it is not really Lord Voldemort he is channeling, but rather a resident of my domain, Aerostreptos, an ancient Mesopotamian regional ruler that created death and mayhem and was only a tactical genius in his own mind! I figured he would fit well with this administration but because he fashioned himself a 'dark lord' with mystical powers to try to dissuade his detractors from killing him, which actually did not work as they threw him into a pit with a thousand scorpions, I guess there was a misidentification. But while this is all true, in actuality, Karl and George haven't really gone public. You are the only one who knows!" Satan laughed, thinking how frustrating this would be for me.
"No. I am the only one who saw that transmission, but that there are evil influences surrounding this administration is hardly a shock. I assure you, the majority of the country, and the world, already knows this.
(To be continued...)