You heard it here first--You are not a Patriot if you vote Republican! 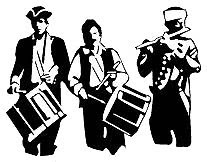 What does it really mean to be an American? What is a patriotic American? A few great Americans wrote that "all men are created equal". If they had lived in more enlightened times I am quite sure they would have said "all people are created equal". It has been a long time since Republicans treated all Americans, much less all people, as equals. In the last eight years George W. Bush has treated only those who are rich and friends of his and Dick Cheney's as equals. Conservatives of George W. Bush's ilk lie and obfuscate to meet their own personal agendas. They tell you that you need smaller government because it's not right for government to interfere in your lives. I'll tell you government should be as little involved as absolutely possible. The convince you that really all government is for us to protect you from invading nations, and other than that you should really be on your own; because its best for you that way. Then they'll tell you they can have an abortion, can have sex with who you choose, probably love to have certain kinds of sex and only allowed to marry people that they deem proper. What they really mean when they tell you that you need smaller government is that they feel that rich people like them shouldn't have to help out the poor and sick. They don't care about healthcare reform because they can afford health insurance. They want to make it illegal for you to have an abortion, but then cut programs that would provide aid for you and your child once they're born. In case you were wondering, this is not the American way. It's not what our forefathers fought for. It's not the meaning of their written words. If you study history and historical documents you will find that the people who founded this country were great people and great thinkers. They took risks and committed selfless acts. There are almost no politicians alive today who could stand up to a comparison with those that started this great nation. Our soldiers are patriots. They risk their lives for protecting our great nation. Even in wars that you may consider unjust, from Vietnam through the Iraq war, you can only blame the wars on the politicians, but you must respect and revere what our soldiers offer up to their nation. Our police and firefighters are patriots. They lay it on the line for their fellow country people every day. When you vote you are committing a patriotic act. When you speak out, whether for or against your government, you are committing a patriotic act. Your forefathers created this great nation and thousands of lives have been laid down through the years to protect your rights to say what you have to say. If you look at the politicians who tried to paint dissenters as unpatriotic you will see that they have committed more unpatriotic acts; more acts diametrically opposed to the well and teachings of our forefathers, then anyone else. It is no surprise that George W. Bush and Dick Cheney have spent a good part of their administration painting critics of theirs as unpatriotic, because they are perhaps the most unpatriotic leaders of this great nation that we have seen in our own lifetimes. Now, I'm not going to call John McCain unpatriotic. He served his country and he suffered for it. He tried to round on his conscience and cleanly, and was ripped apart by George W. Bush in 2000 because of it. This year, with the Republicans so out of favor, he could've run as the renewed and reinvigorated John McCain who stood for something for many years. He chose not to. To pander to the right wing conservatives he sold his soul, and not to Satan but far worse, to George W. Bush. He has aligned himself with unpatriotic liars who have sullied the great history of our nation. No, I will not call John McCain unpatriotic. However, his campaign and his presidential ambitions have aligned himself with those that are so unpatriotic that it would be a crime against this nation to reward his poor choices by voting him into the White House. I do not know a lot about Barack Obama. I think that's the problem, nobody does. I don't know how he'll react in a crisis or how he'll handle world affecting events, but I do know he hasn't made the poor choices John McCain has. Also in the limited things we do have from Barack Obama we can see a consistency of purpose and compassion throughout the years. I also believe, while they should not have snubbed Hillary who I do believe was qualified to be president, that in choosing Joe Biden he has shown his openness to be guided by experience at his side. Thus, after analyzing our forthcoming election I can only find that the right thing for America and the patriotic thing to do, is to elect Barack Obama and Joe Biden to be president and vice President of the United States later this year.
Posted by LHwrites at 7:39 PM

Who is it that McCain has aligned himself with, that qualifies for your distain? You obviously know that George W. Bush is no friend of his. McCain has a long standing feud with the Christian right.

I don't see what you describe.

On the other hand, I see an Obama who embraces the Palestinian narrative of victimhood...but then flip-flops when everyone is watching. McCain has been quite consistent by comparison.

I am afraid, my friend, that you have a vision of the McCain that has not existed for many years. As I have been very quick to point out here, the John McCain of yesteryear was a politician I could've gotten behind and the Republican I could've voted for. After John McCain was torn apart by George W. Bush in the 2000 election rather than redouble his efforts to be a good and honest man who spoke his mind, he sold himself to George W. Bush and the Christian right. When you say he is no friend to the Christian right you are partially correct, but what you leave out is that that is not a choice of his. He has worked very hard to become a friend of the Christian right. He has embraced George W. Bush's policies including many around Iraq and abortion that he has been against. He explained why he supported George W. Bush when George W. Bush first dropped to 30% approval ratings because he said anybody can stand behind the president when he is popular but I'll stand behind this president, as unpopular as he is, because in these issues I think he is right. The John McCain you remember with someone I could also believe in. You don't live here anymore. As for Barack Obama, I won't say he's been perfectly consistent or that he hasn't flip-flopped. I am no big fan of Barack Obama. I do say that after reading his writings, reviewing his speeches, looking at his body of work in the community and his very limited amount of legislation, I can say that he's a man who has ideals and wants to work for the common good of every American citizen. It has been quite clear in this blog that I did not think he was the best choice for the Democrats. And I've given this a lot of thought, because I can say it might be better to deal with the evil that I know, a George W. Bush version of John McCain versus an evil I don't know in a brand-new untested Barack Obama. However, thanks to the rebirth and rechristening of John McCain as a George W. Bush Republican, who is given up all his ideals, many of his positions and has completely reworked the way he chooses to be a politician, I am very comfortable in saying he is no more of a known quantity than Barack Obama. And Barack Obama stands for some amount of health care reform, tax relief for the middle class and waging war on the real terrorists, not just those people George W. and Dick don’t like.

Plus, John McCain worked hard to find someone who is even less qualified than Barack Obama and who shares even less ideals with women and the middle class, to be his running mate. I am not sure she should be a heartbeat from the Presidency, when that heart has been beating for as many years as John McCain's