My Mom's Birthday is January 24th. In honor of my mom,this story is available for about the next 36 hours. 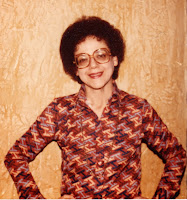 Nice. May her soul ascend with your love.